Welcome to my blog!

Here’s what you can expect from my blogs:

NYC: I go there every weekend, and I do a lot of walking around there, and sightseeing.

ROAD TRIP: I just recently went on a road trip this past summer. I hopefully will post one in every city I’ve been to. have posted three blog entries so far, and hopefully maybe there will be three or four more in the future.

SPORTS: I go to lots of sporting events throughout the year. I haven’t done many, but I’ve posted a few entries from sporting events. Other times, especially in the road trip blogs, I went to a few MLB games, so they will make an appearance throughout the blog. Since the MLB and NHL are generally much more lenient with their camera policies, I can use my bigger lens.

On July 5th, 2017, we arrived in Pittsburgh around 11:00 P.M. we were all exhausted and ready to check into our hotel. We had a long drive to Indianapolis the following day, so it was important that we would get our sleep.

We went to the front desk, only to realize that we had never checked into the hotel to begin with. It wasn’t much of a hassle to get a room anyway. We ended up getting a handicap-accessible room on a really high floor that looked directly into PNC Park, home of the Pittsburgh Pirates.

Here is our view of the stadium from our hotel room at night:

It’s only blurry because there was no proper WB setting with the lights.

After some late night pizza, I went to bed, and then ended up waking up around 7:00 A.M. to take a photo of the stadium in the morning (much better quality) 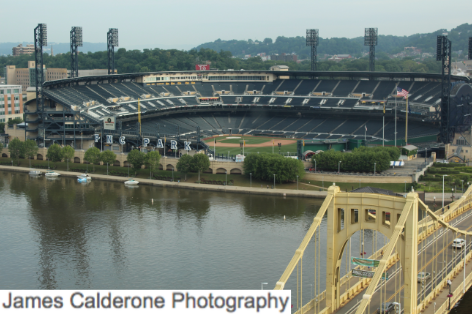 I was the first one up, so I grabbed my laptop and found out that there was a 10:00 A.M. tour of PNC Park. Being someone who has a goal to visit all 30 MLB stadiums, I was super excited. My Mom was happy and without hesitating, we packed up our room, and walked across the Roberto Clemente Bridge and into the stadium.

Here is a photo of the Roberto Clemente Bridge below:

Because the Pirates were on the road, we got access to a lot more things in the stadium that you normally wouldn’t have access to if you toured the stadium on the day of a Pirates home game. Those things include the clubhouse, batting cages, dugout, and even go on the field! So even though we didn’t end up seeing a game in Pittsburgh this time around, I considered in a win-win situation, maybe even better. I’d take seeing all of that stuff over a random Pirates game pretty much any day.

For privacy reasons, we were not allowed to take photos inside the Pirates clubhouse, in fact, they made us put phones and cameras in a box right as we entered. This was the closest photo of the clubhouse access that we got:

….and that was before we actually got inside it.

With the exception of a few bats, there wasn’t anything to get a picture of in the batting cages, but as we left to go into the dugout, I found this great quote by Pirates legend, Roberto Clemente in the tunnel:

“When I put on my uniform, I fell I am the proudest man on Earth.”

After seeing that, we went into the Pirates dugout. Here’s a photo of my view of the field from the dugout:

It was pretty cool with the skyline of Pittsburgh in the background!

We were in there for probably a good five minutes and then went on the field. I took quite a few photos, but my favorite one was the panorama I took on the field:

It was pretty cool nonetheless.

The last major stop on the tour was the press box. This was the view:

You could see a lot more than I thought. It was pretty nice being up that high and seeing all of that cool stuff like the field, the skyline, and the Allegheny River.

At that point, the tour was pretty much over. We had about an hour before we had to check out. So we walked back over the bridge and to our hotel.

Before we left for good, I made sure to get one final picture of our view: 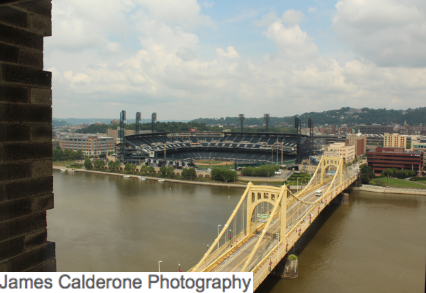 Even though we had only stayed in Pittsburgh for like 14 hours, I enjoyed every moment of it. It was a great way to kick off our trip. Hopefully I’ll see a game in Pittsburgh soon!