Welcome to my blog!

Here’s what you can expect from my blogs:

NYC: I go there every weekend, and I do a lot of walking around there, and sightseeing.

ROAD TRIP: I just recently went on a road trip this past summer. I hopefully will post one in every city I’ve been to. have posted three blog entries so far, and hopefully maybe there will be three or four more in the future.

SPORTS: I go to lots of sporting events throughout the year. I haven’t done many, but I’ve posted a few entries from sporting events. Other times, especially in the road trip blogs, I went to a few MLB games, so they will make an appearance throughout the blog. Since the MLB and NHL are generally much more lenient with their camera policies, I can use my bigger lens.

It was almost a four hour drive to get to St. Louis from Indianapolis. The Cardinals were playing a 4:10 game so when we got to the hotel, it was a bit crazy. Since the hotel was right across the street from Busch Stadium, everyone who was staying there was pretty much there to go to the Cardinals game, whether it was that day, or the following day (the game I would be going to). When we checked in, there was Cardinals memorabilia everywhere, and lots of fans decked out in Cardinals gear. There was also a flat screen T.V. on the wall showing the game.

We checked into our hotel room, and got upstairs. It wasn’t anything like what we booked on the website, but we still had somewhat of a view of the stadium. In the photo on the website, we could see directly into center field and almost the entire stadium. In our room, you could only see a bit of right field and the top of the infield.

Here was our view from the hotel room:

When we got there, we were hoping to watch the game from our hotel, but since the view wasn’t exactly promising, we went to the FOX Sports Midwest restaurant, which is actually connected to the stadium (you could probably see it in the image above).

Also in the image above is a small baseball field, that’s where we hung out after we finished eating. We played a little bit of catch and headed back to the hotel when the game ended. The Mets lost 4-1.

Here’s a photo of the rotunda before we headed inside. 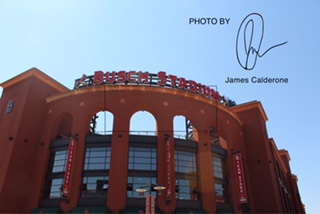 We got in early to get a promotional hat, and hopefully to see a bit of batting practice. It ended up being cancelled because it was 94 degrees fahrenheit, and it was an afternoon game.

Instead, we just watched the Mets pitchers throw down the left field line. When they were done, they threw all of their warm-up balls into the seats. One of them skimmed off of my glove and landed behind me. Oh well…

There was still an hour before the game started so I was having a friendly conversation with a security guard in our section. His name was either Brandon or Aaron, I forget, but regardless, he was friendly. He was telling me about how he started working at the stadium since high school, and he got to miss school / leave early to work at the 2011 World Series! Super cool!

Anyway, about 15 minutes before the game started, I headed over to the bullpen to watch Steven Matz warm up in the bullpen. After the took the field, Seth Lugo, another Mets starting pitcher, threw me a ball! (it took two attempts, but a ball is a ball!). I headed back to my actual seat as the game was about to begin.

Here is a photo of the ball I got in my actual seat.

This was the final game before the All-Star break, (which the Mets badly needed) so I was hoping to see them end the first half of the season. The pitcher the Mets were facing was Lance Lynn, one of the best in the Cardinals rotation.

Here is a photo of him warming up, moments before the game started: 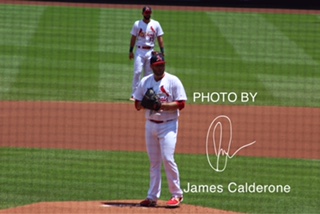 Jose Reyes led off the game. Here’s a photo of him, ready to take the first pitch:

Michael Conforto batted next, here he is hitting a fly ball to center-field (also, my favorite photo I took at the game)

The Mets went down 1-2-3, so it was time for Steven Matz to come into the game.

Here’s a photo of him warming up before the bottom of the first inning:

Everyone got excited when Yadier Molina came up to bat, so I didn’t hesitate to get a photo:

The Cardinals took the early lead, and never gave it back. The Mets lost 6-0, putting an exclamation mark on a pretty bad first half. (They also get killed in Sunday afternoon games, so I wasn’t too surprised).

Even though the Mets lost, I wasn’t too upset. After the game, all kids got to run the bases!

Here is a photo of me entering the field from right field:

I took an entire video if me running the bases, but couldn’t upload it.

After running the bases, I got a photo of the skyline, from the third base line: 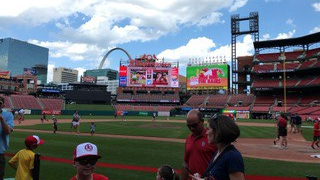 We ate dinner with my cousin, and then headed back to the hotel. Where we would spend the night and check out tomorrow.

In the morning, we tried to go on the arch, but since we had to buy a ticket for a 4:30 P.M. tour, that didn’t work out too well, but I did manage to get one final shot of the arch before we left:

As we left, we went to the botanical gardens, which was beautiful!

That was pretty much it after that. It was a good trip, but not as good as we expected, hopefully, we’ll go back sometime, and have a better and different experience.